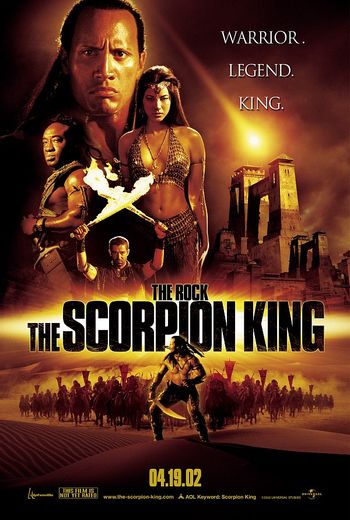 A Spin-Off/Prequel to The Mummy Returns, released in 2002.

It's the year 5000 BC - or thereabouts. The anachronistic Greek general Memnon is out to, you guessed it, take over the world, which consists of African tribesmen, Amazons and the City of Gomorrah in improbably close conjunction. The leaders of the Free Peoples, including the chiefs of the aforesaid Africans and Amazons, hire the 'last of the Akkadians' a race of deadly assassins, (which would come as a surprise to Sargon of Akkadia) to kill not Memnon, but the evil sorcerer whose magic and prophecies are the ultimate source of his success.

The film also spawned four direct-to-video prequels/sequels. The second film, subtitled Rise of a Warrior (2008), is a prequel showing how Mathayus became the badass he is at the start of the first film, as well as his quest to avenge the deaths of his father and brother at the hands of the evil sorcerer-king Sargon. It also started off the sequels' tradition of having one Designated Girl Fight per film between the Action Girl female lead and a token Dark Action Girl.

The third film, subtitled Battle for Redemption (2012), is a straight sequel to the first film, revealing that Mathyus eventually fell from kinghood after a terrible tragedy and returned to his old life as a mercenary. However, his current mission to help a beautiful princess save her kingdom from the evil warlord Talus offers him a chance for redemption for what he sees as his past failings as a king.

The fourth film, subtitled Quest for Power (2015) appears to be set at an indeterminate point between the first and third films (i.e. after Mathayus lost his throne but before the events of the third film), has Mathayus betrayed by his apprentice Drazen, a power-hungry prince who used him to steal a relic that could lead to unimaginable power. Mathayus now finds himself in a race against time to beat his former friend to the power he craves, aided by the members of the royal family Drazen's father overthrew to become a king.

The fifth and final movie, subtitled Book of Souls (2018), has Mathayus teaming up with a Nubian princess called Tala to find a legendary relic known as the Book of Souls to defeat the evil warlord Nebserek, who has acquired a cursed artifact known as the Fang of Anubis, which can steal the souls of those slain with it and can only be stopped by the titular book.