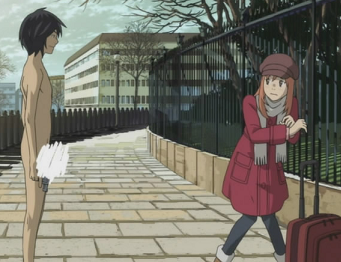 Protip: A girl should know your name before your "size".
Advertisement:

Someone enters an obscured area, sometimes in a hurry, and catches a stranger with their pants down, undressed or in the bath/shower.

For even more reaction, the naked character may Open the Door and See All the People.

Compare Accidental Pervert and Outdoor Bath Peeping. If Played for Laughs, it's because Naked People Are Funny. Can overlap with Naked on Arrival.