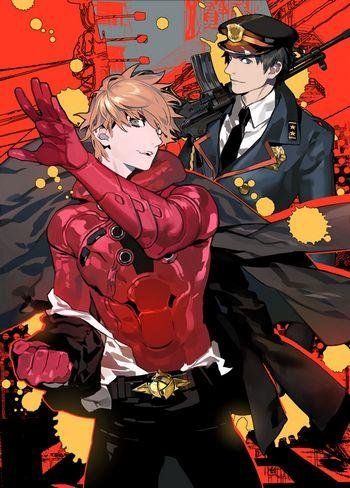 "A hero will never give up, never hide, never be defeated, never accept evil."
Advertisement:

Walking home one night, off-duty policeman Hidenori Goto confronts an apparent pervert stripping in an alleyway. Introducing himself as male model Masayoshi Hazama, the man explains that he was actually changing out of his costume, as he is a would-be superhero called "Samurai Flamenco." Escorting Hazama home, Goto discovers how deep the model's fixation on both superheroes and justice runs despite his total lacking of superpowers.

Despite his initial focus on fighting neighborhood misdemeanors such as unlawful smoking and umbrella theft, Hazama attracts publicity after a series of videos of his antics go viral. Joined shortly thereafter by a woman calling herself Flamenco Girl, Hazama soon finds himself tackling the recent crime wave sweeping Tokyo with a network of allies. And then the first arc ends by raising the bar significantly.

The show is mostly a slice of life comedy, and an emotionally realistic, light-hearted Reconstruction of super hero tropes in general. Outside of that, the show can be considered an Affectionate Parody of both the Western Superhero and Eastern Toku genres, including blatant nods to series like Kamen Rider, The Avengers, and Super Sentai/Power Rangers.

The anime series was licensed by Aniplex USA in North America, though low interest has kept it from getting a physical home release. It was later available for streaming on Crunchyroll, but the license expired in 2021. Compare Zebraman, a film with similar themes.