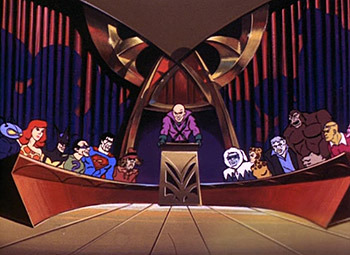 "Gentlemen...to evil!"
Lex Luthor: I was just celebrating God's return. Out of the ground and back up into the sky. He and his odd little friends are forming some sort of League.
Slade Wilson: You better not be wasting my time.
Lex Luthor: No, I have too much to live for — and more important things to do. We have to level the playing field, Mr. Wilson. To put it plainly... shouldn't we have a League of our own?
— Justice League (2017)
Advertisement:

Meanwhile, at the Legion of Doom...

Plot of an episode or Story Arc, wherein one or more villainous characters — usually made up of some combination of past one-shots, members of the Rogues Gallery, and/or a few possible newcomers — join forces to destroy their common enemies, the protagonists.

Usually, they will initially overpower the heroes, but their own evil selfishness and inability to trust each other undermines their unified front, and the heroes strike at this weakness. Or one dominant personality double-crosses the others. Either way, the team dissolves at the end.

The Legion of Doom is normally formed in response to the heroes teaming up at much earlier point, a sort of declaration of war. A simple group of villains working together for a temporary purpose doesn't count.

Often saved for a season or series finale. Crossovers do this a lot, using one villain from each series.

Named after the nemesis organization to the Superfriends, who came together during the Challenge of the Superfriends era of the franchise and actually managed to stay together, mostly due to relentless use of a Diabolus ex Machina Reset Button to escape in the last scene, usually because their Hall of Doom can fly or burrow anywhere, and because their opponents, the Superfriends, frequently forget they have super powers.

Likely to be a Big Bad Duumvirate as well. Evil Is One Big, Happy Family is usually involved. For one-shot team ups that are usually on a smaller scale, see Villain Team-Up. Standard Evil Organization Squad is similar, but they tend to already be a group when introduced and are generally treated as a more serious threat.

Contrast Super Team, their good equivalent. Not to be confused with Doom Troops, who are extremely scary Mooks, but mooks nonetheless.

Has nothing to do with Eric Lindros, John LeClair, or Mikael Renberg or the Tag Team, The Road Warriors (well, actually it does, see below).