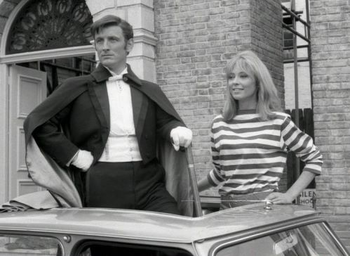 Adam and Georgina.
"It appears that 1966 has a great deal of capacity for a man of my talents."
Advertisement:

Adam Adamant Lives! was The BBC's answer to The Avengers (1960s), but less successful. Produced in black and white, it ran for two seasons from 1966 to 1967. Repeats have been rare, but BBC 4 now shows the occasional episode. All of the surviving episodes were released on DVD in 2006, with script PDFs for the missing ones.

In the pilot, the eponymous Edwardian gentleman adventurer (played by Gerald Harper) was betrayed by his fiancee Louise and frozen in a block of ice by his nemesis The Face. 64 years later he was dug up by some workmen and thawed out, not much the worse for wear but very disoriented. Georgina Jones (Juliet Harmer), a swinging chick and dedicated Adamant fan, found him wandering around central London and took him home. Saving her from a murderous protection racket was his first step in resuming his adventuring career.

Subsequent episodes established more of a formula. Either Adam or Georgina would stumble upon a plot, usually involving some technofantasy element (clothes that kill their wearers, washing powder with an addictive scent, etc.). Adam would forbid Georgina to investigate, but she would anyway. Then he would have to rescue her as well as solving the case. In some of the stories they would solve it together. In episode 2 Adam employed a former seaside entertainer William Simms (Jack May) as a valet. One of the show's highlights was the constant bickering between Simms and Georgina.

There was never much romance between the two leads. Georgina hero-worshiped Adam to the point of stalking him (in one episode she followed him all the way to Japan and disguised herself as a geisha to get near him), but his attitude to her was always more paternal. He would, however, frequently be attracted to female villains. His blind spot was that he could never believe a woman to be capable of evil, no matter how many evil women he met.

The series was produced by Verity Lambert. In late 1969 it would become a significant influence on her earlier series Doctor Who when the third Doctor, Jon Pertwee, would also become a dashing man-out-of-time with a taste for velvet and capes. In 2019 Big Finish (famous for their Doctor Who audio dramas) announced a Continuity Reboot of the series set to be released in January 2020.

Tropes pertaining to the audio remake: