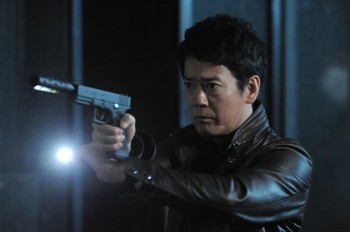 24 Japan is a 2020 Japanese remake by TV Asahi, which aired the first episode on October 9, 2020 with the rights granted by Fox Broadcasting Company. Negotiations were held for five years with the condition that the 24 episode format be used instead of the usual 12 episode format that Japanese TV shows use nowadays. The show stars Toshiaki Karasawa, Tae Kimura, Yukie Nakama, Chiaki Kuriyama and Hiroaki Murakami.

24 Japan is a Japanese adaptation of the original 24, starting from the first season. According to the production crew, changes were made to accomodate Japanese political and social realities.

The show takes place in the year 2020 where the Minseinote Democractic Party politician Urara Asakura is in national elections for the next prime minister. She is considered to make history as the first female politician to be the first female prime minsiter if elected. However, the Counter Terrorist Unit (CTU) is alerted that assassins are being recruited to kill her before she succeeds. Genba Shido, leading CTU agent, is tasked to investigate. Meanwhile, a plane crash occurs as it approches Chiba Prefectural airspace. Meanwhile, CTU Tokyo Office director Heisuke Satonaka warns Shido that CTU has a mole and he needs to find out who it is.