Literature / The Saga of the Volsungs 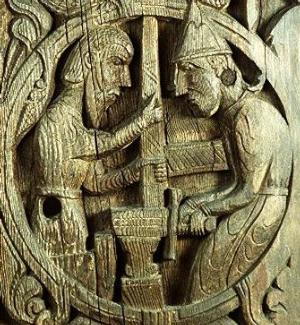 Sigurd and Regin at the forge. Woodcarving from the Sigurd Portal

of the Hylestad stave church, Norway, c. 1200.
"No one will protest that there has been too little killing."
— Brynhild, Völsunga saga
Advertisement:

Völsunga saga, or Saga of the Volsungs, is an Icelandic Legendary Saga, easily the single most prominent work of that group. It was composed in the late 13th century (though the only extant manuscript dates from c. 1400). Like most of the Icelandic sagas, it is of anonymous authorship. The author obviously worked along the heroic lays collected in the Codex Regius.

Structurally, Völsunga saga is a sprawling Generational Saga, starting with Sigi, supposedly a son of Odin, who commits murder of a slave. For this, he is banished from his homeland (the identity of which is never disclosed), eventually becoming a sea-rover and conquering himself a kingdom. Sigi’s son Rerir is the father of Völsung, who marries a Valkyrie and from whom the lineage receives its name, the Völsungs.

All the descendants of Sigi, male or female, are of excessive strength, courage, and willpower. Yet for all their heroism, they are, in every new generation, haunted by bad luck and a tendency to come to horrible and untimely ends, and their history is chock full of bloodbaths and grisly tragedies — most frequently, the betrayal of in-laws, the perennial curse of the Völsungs. None of them dies a peaceful death, and only a few die in honorable battle – more often they are backstabbed, murdered, or even commit suicide.

With every new generation, there arises a son who is even more prodigious and formidable than his father, until the lineage reaches its climax with Sigurd, Sigi’s great-great-grandson, who reaches the pinnacle of heroism when he kills the dragon Fafnir, and thus earns fame unparalleled by any mortal hero before or after him — and not to forget, the enormous treasure of the dragon. But Sigurd does not escape the Völsung’s curse: An intrigue causes him to get caught up in a love triangle between two beautiful and proud women, each from a powerful heroic clan in their own right — Brynhild of the Budlungs, a Valkyrie who is his first love, and Gudrun of the Gjukungs, also known as Niflungs, whom he marries. Sigurd ends up being murdered by his in-laws, the brothers of Gudrun, and no son of him survives to pass on the Völsung name.

But the Niflungs seem to have inherited the curse of the Völsungs with Sigurd’s murder, as they are lured to their death by Atli, Brynhild’s brother and Gudrun’s second husband, who in turn wants to get his hands on the treasure.

The last chapters are dedicated to Gudrun, whose sufferings are still not over, as she must live to see Svanhild, her daughter from Sigurd and the last Völsung alive, being unjustly killed by King Jörmunrekkr, and the vengeance Gudrun exacts comes at a high price.

In the early 13th century, the Völsunga saga was adapted and expanded into the Nibelungenlied by an anonymous author. Despite having been written down earlier, it contains anachronistic alterations not present in the versions recorded in the Völsunga saga and The Eddas, which are thought to preserve earlier elements of the story. In 1888, William Morris made a translation that can be read here.

J. R. R. Tolkien also adapted much of it into a novel-length epic poem called The Legend of Sigurd and Gudrún, taking a bit of creative license to fit the tone of his own legendarium.