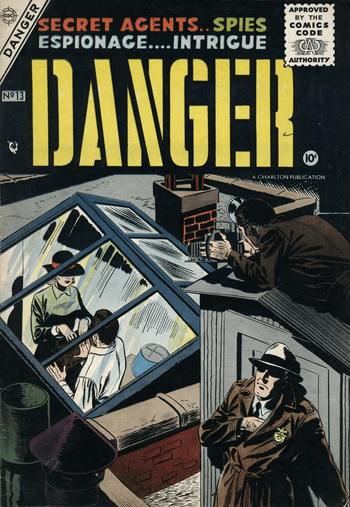 "There's a man who leads a life of danger
To everyone he meets he stays a stranger
With every move he makes another chance he takes
Odds are he won't live to see tomorrow."
— Johnny Rivers, "Secret Agent Man"
Advertisement:

Related to the Action Series, although not necessarily a series, and not necessarily even action-heavy, it's any work in which the main character or characters are spies, secret agents, double agents, or some other form of espionage professional. Spy Fiction tends to fall along a spectrum of what we've dubbed "flavours": From "Martini" to "Stale Beer".

The Martini Flavored and Stale Beer Flavored tropes as well as the various trope permutations (Dirty Martini and Bathtub Gin) may involve a Cloak and Dagger agency, Agents Dating, or any of the full gamut of Espionage Tropes.

Spy Fiction can often overlap with some other genres. Any stories which concern international espionage, military intelligence, geopolitical conflicts (both hot and cold wars), will obviously overlap with Military and Warfare Works. Stories about (undercover) police detectives or law enforcement agents investigating domestic criminal activity tend to fall under Mystery Fiction and Police Procedural, though they're not always classified as being in the spy genre. Conspiracy Thrillers are very closely related, as they also tend to revolve around people who work for (or have close encounters with) secretive organizations pursuing their own political agendas. There's also Ninja Fiction, which may sometimes feature ninjas conducting espionage for intelligence purposes in addition to covert assassinations.

Tamar Rabinyan assists a Mossad team already in Tehran to upload a hacking program to disable the city's power grid to knock power out in Evin prison.

Tamar Rabinyan assists a Mossad team already in Tehran to upload a hacking program to disable the city's power grid to knock power out in Evin prison.