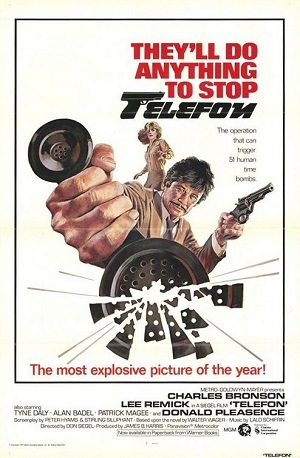 Telefon is a 1977 thriller in the spy genre, based on a 1975 novel. Directed by Don Siegel, it starred Charles Bronson, Lee Remick, and Donald Pleasence.

During the Cold War, the KGB has planted covert operatives inside the United States to cripple American infrastructure in the event of a war. The agents underwent intense brainwashing procedures which erased their old identities and give them new ones as ostensible U.S. citizens until they can be activated. Despite the new period of detenté erasing the need for the plot, KGB clerk Nikolai Dalchimsky (Pleasence) goes rogue to activate the agents against his superior's orders. Major Grigori Bortsov (Bronson) is sent to the States to stop Dalchimsky.