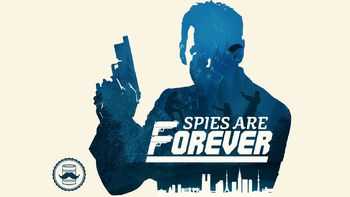 It's a musical!
"Once a spy, always a spy, forever..."
Advertisement:

Spies are Forever is a full-length Musical Comedy created by the Tin Can Brothers (Corey Lubowich, Joey Richter, and Brian Rosenthal), set during the Cold War period.

It is a loving parody of the spy film genre, and also a more serious work than their usual sketch comedies. Special Agent Curt Mega, the pride of the US intelligence community, suffers a tragic blow to his confidence and his career when his partner Owen Carvour is killed in a disastrous mission in 1957. Four years later, he tries to get back into the game and prove he's still the spy he used to be when a deadly nuclear warhead goes missing and ends up on the black market; his mission to retrieve it pits him against a sultry Russian Double Agent, a Nazi conspiracy, and the amoral hired gun known only as the Deadliest Man Alive...

Spies Are Forever ran between March 11 and April 3, 2016, at the NoHo Arts Center in Los Angeles, with a follow-up concert performance of the songs in the show titled Spies Are Forever: Reloaded as part of the late-night programming of the Team Starkid Summer Season at Stage 773 in Chicago, from July 23-25 2016. There was a plan to perform a reunion concert, Spies Are Forever: In Concert at 54 Below, in New York from June 8-9, 2020, which has been indefinitely postponed due to the COVID-19 Pandemic, with plans for a future reunion or a sequel still in the air.

Spies are Forever provides examples of:

WTF IS WRONG WITH YOU PEOPLE?!

Yes, you are bad.

WTF IS WRONG WITH YOU PEOPLE?!

Yes, you are bad.