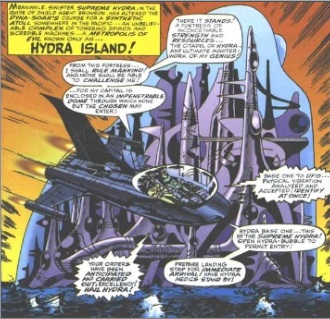 A Supervillain Lair (or a Hero's Headquarters) At Sea! Isolated from any inference of those pesky heroes, our resident baddies can concoct their schemes of world domination in peace. At least until the third act.

The primary advantage to using such bases is that its isolation and distance from inhabited areas or other landmasses allows the story to explain how its supervillain or evil genius is running an elaborate, high-tech base swarming with minions and superweapons without attracting excess notice.

Bonus points if the island, or part of it, is shaped like a skull. Extra points for having an active volcano form part of the base, despite the obvious problems with heat keeping such things from being practical in real life.

A Sub-Trope of Island of Mystery.

Often equipped with a Den of Iniquity. See also Elaborate Underground Base and Underwater Base, two other popular ways for secretive individuals to avoid notice. Overlap is often common.

Cobalt Base is a fortified island location that Mario somehow gets to without a boat.

Cobalt Base is a fortified island location that Mario somehow gets to without a boat.