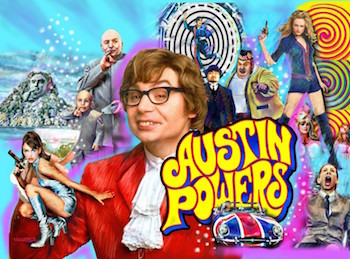 Austin Powers is an arcade pinball game designed by Lonnie Ropp and John Borg, and released in 2001 by Stern Pinball.

Based on the first two movies in the Austin Powers comedy series, the game has you accompany the British super-spy as he battles Dr. Evil and his forces across time. Foil Fat Bastard behind the toilet, spin Mini-Me into submission, then use the right loop to defeat the other Henchmen. Bash Dr. Evil to restore Austin's mojo, shoot the center ramp to activate the Time Machine, and fire the Big Frickin' Laser at Washington DC when it swings out from the bottom of the playfield. If you're groovy enough, you can stop the Subterranian Drill, take down Virtucon, and destroy Dr. Evil's Moon Base all while Austin dances away.

Austin Powers was released at a time when arcade pinball was fighting for survival, as the closure of Williams Electronics left Stern Pinball scrambling to stay afloat as the only remaining manufacturer. As such, Austin Powers is derided by pinheads for its simplistic rules, clunky flow, shoddy workmanship, uninspired backglass, and pixelated art. Despite all this, it remains popular with casual players and fans of the films, who just want to have fun knocking balls off of Dr. Evil's henchmen.