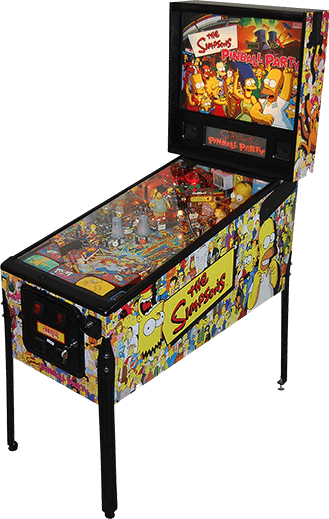 As one would expect, this pinball game is a cornucopia of all things Simpsons as the entire town of Springfield comes out for a wild nonstop party. Take a tour of Springfield's iconic landmarks, from Moe's Tavern and the town monorail to the Kwik-E-Mart and the Nuclear Power Plant. The game features the talking, moving head of Homer Simpson, along with skateboarding Bart, Itchy & Scratchy, and Comic Book Guy. The garage door leads to a second level with a dot-matrix color television set and a couch that gets filled up to start multiball. The party is easy to start, but only the very best players will get to invoke Super Duper Mega Extreme Wizard Mode.

The game features original dialog performed by Nancy Cartwright, Hank Azaria and Dan Castellaneta. It is said to feature one of the most complex rule sheets that were ever designed for a pinball machine at the time, with the ability to stack various modes and multi-balls on top of each other. 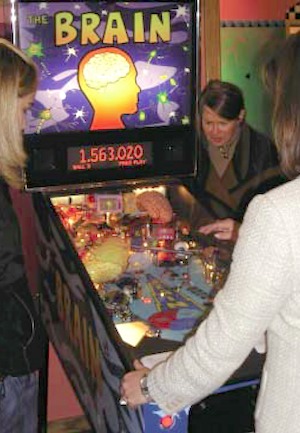 The Brain, being played by members of the Epilepsy Foundation

In 2006, Stern Pinball partnered with the Discovery Center Museum in Rockford, Illinois, and the Epilepsy Foundation of North/Central Illinois, Iowa, and Nebraska to produce an edutainment pinball called The Brain. All of the artwork was done by the museum's Exhibits Manager, Bruce Qaust, who first conceived of the idea for the exhibit.

The Brain is a modified version of The Simpsons Pinball Party; all references to the show were stripped out, with digitized pinball chimes replacing the sound effects, while the playfield TV continuously scrolls "BRAIN GAME." The game itself focuses on the five senses — sight, hearing, touch, taste, and smell — and players score points by lighting up the various parts of the brain.

A unique twist to the game is its Epileptic Seizures; at random intervals, the table suddenly shuts down, and a light-up panel displays "Seizure — stand by for game to resume." The game continues after about fifteen seconds, and is meant to teach that seizures are nothing to be afraid of. To prevent pinball wizards from dominating the game, it also includes a time limit, with a special game over message requesting players to let another person have a turn.

This pinball game provides examples of: