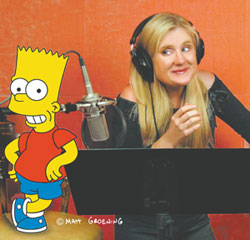 (born October 25, 1957 in Dayton, Ohio) has been doing cartoon voices since Hanna-Barbera's version of Richie Rich (1980) in the early 1980s (after being personally trained by the legendary Daws Butler), but is probably best known the world over for her voice work on the long-running FOX animated sitcom The Simpsons, where she is not only the voice of devious prankster Simpsons son, Bart, but also the voice of Ned Flanders' son Toddnote Rod is voiced by Pamela Hayden, who voices bully/teenage petty thug Jimbo Jones and Bart's loser friend, Milhouse van Houten, dim-witted second grader (and son of the town's incompetent police chief) Ralph Wiggum, fourth-grade bully Nelson Muntz, over-aged elementary school bully, petty thug, and (allegedly) teenaged father Kearney Zzyzwicznote Kearney's last name is Polish and pronounced "jeez-WICH". It was unknown until the season 18 episode "24 Minutes", and provides vocal effects (cooing, crying, and laughing) for youngest Simpsons child, Maggie. In addition, Cartwright is also an animation producer, responsible for NASCAR.com's Web Animation series The Kellys. She has adapted her book, My Life as a 10-Year-Old Boy, into an audiobook and a one-woman stage show.
Advertisement:

Cartwright has also appeared in live action, including Joe Dante's segment of Twilight Zone: The Movie, a guest appearance on Cheers, the Made-for-TV Movie Marian Rose White, and the American Godzilla movie (which also had Hank Azaria and Harry Shearer of The Simpsons), as well as making a guest appearance on an episode of 24 (the same season, stars Kiefer Sutherland and Mary Lynn Rajskub returned the favor by reprising their roles on 24 for a guest appearance on The Simpsons). Originally, she was going to do voice work on South Park, but turned it down due to its vulgar content. She even was a celebrity guest on Tom Bergeron's The Hollywood Squares and Donny Osmond's Pyramid.

Outside show business, Cartwright is a prominent member of the Church of Scientology.

Cartwright has done character voices for the following works: