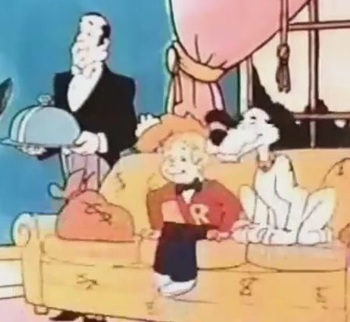 Richie with Dollar and Cadbury

How rich can you get?
You'll never gonna know till you've met.
This young boy. Richie Rich is his name.
He's rich enough in the Rich Hall of Fame.
His bank account is as rich as his name.
That's rich. Richie Rich.
—"The Richie Rich Show" Theme Song

Richie Rich is an animated cartoon series produced by Hanna-Barbera that first aired on ABC in 1980, adapted from the Richie Rich comic book series by Harvey Comics. The series originally aired in various omnibus series with Scooby-Doo, The Little Rascals, Pac-Man and Monchhichis.

In the series, Richie Rich (Sparky Marcus), his girlfriend Gloria Glad (Nancy Cartwright), and his dog Dollar go on various adventures to stop criminals from stealing valuables and to foil the pranks of Richie's cousin Reggie Van Dough (Dick Beals).

The series is divided into 4 segments.