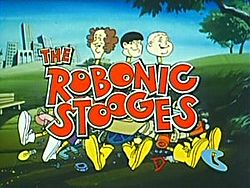 The brain trust 2.0.
The Robonic Stooges is a half-hour Saturday Morning Cartoon from 1978. The show is — well, Exactly What It Says on the Tin. The Three Stooges receive The Six Million Dollar Man treatment in one of the strangest animated adaptations ever. It originally aired as an extra segment on The Skatebirds, but got its own half-hour timeslot, with edited reruns of Clue Club, that lasted 16 episodes. Junk dealers Larry, Curly, and Moe bumble around as crime-fighters with special bionic powers, who get instructions from their exasperated boss, Agent 000.