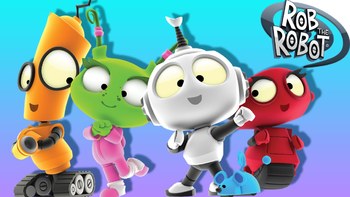 Rob the Robot is a 2010 Canadian All-CGI Cartoon produced by Amberwood Entertainment and created by Manuel Rosen. Based on the book series of the same name by John Magart, the show airs on TVO Kids and Knowledge Network in English-speaking Canada and CBC Télévision de Radio-Canada in French-speaking Canada.

The series follows Rob, a curious young robot. He and his friends Ema, TK, and Orbit, explore different planets in the Robot Galaxy while learning different lessons along the way.

Do not confuse with Nintendo's R.O.B., or Robby the Robot.