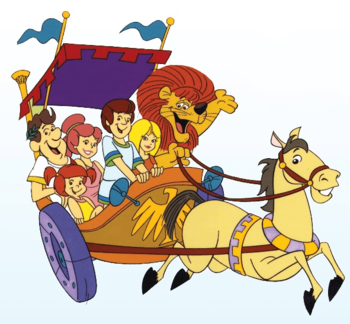 This animated series from Hanna-Barbera is about a Dom Com family in "ancient" Rome. As on The Flintstones, Anachronism Stew is an essential part of this series—but the starting point is later. It aired only in the 1972-73 season on NBC.

The head of the family is Augustus "Gus" Holiday. He has a wife, Laurie; a daughter, Precocia, and a son, Happius, or "Happy"/"Hap" for short—much like The Jetsons (although unlike that show, this family features an older brother and younger sister). Their pet lion, Brutus, is a Big Eater.