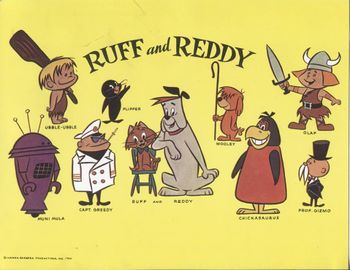 The Ruff & Reddy Show was the first production of the Hanna-Barbera studio and the very first network cartoon made specifically for Saturday morning. It premiered December 14, 1957, on NBC.

Ruff was a kitten and Reddy a dog, and together they got involved in clandestine escapades involving anything from alien invasions to swamp pirates to treasure plunderers. In some adventures, they are assisted by Professor Gizmo, a kindly old scientist. Taking a cue from Crusader Rabbit, it was serialized with 13 episodes making up a story arc and four story arcs making up a season. They were seen as features of the network show which had live action segments. The first run (1957–60) was hosted by Jimmy Blaine, the second run (1962–64) had Captain Bob Cottle in the host segments. The first run also featured cartoons from Columbia's theatrical short subjects.

Ruff & Reddy, which was all but rejected by Columbia Pictures president Harry Cohn (he was overruled by Columbia's financial officer, John Mitchell—the studio bankrolled and distributed the series), was sponsored by General Foods (maker of Post cereals) and was a modest success. Hanna-Barbera would achieve runaway success a year later with The Huckleberry Hound Show.

A comic series based on the original show was released in 2017, featuring Ruff and Reddy as a couple of has-been actors attempting to revitalize their careers.

In the HBO Max series Jellystone!, Ruff and Reddy are reimagined as child-age robots.

This Hanna-Barbera cartoon provides examples of: