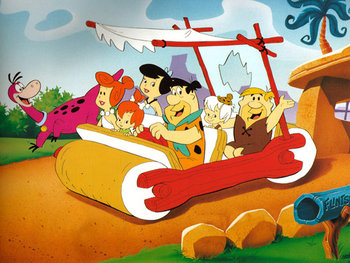 The modern Stone Age family. note From left to right, Dino, Wilma Flintstone, Pebbles Flintstone, Betty Rubble, Fred Flintstone, Bamm-Bamm Rubble, Barney Rubble
"Yabba-Dabba-Doo!"
— Fred Flintstone, every single episode, ever.
Flintstones! Meet the Flintstones!
They're the modern Stone Age family!
From the... town of Bedrock
They're a page right out of history!
Let's ride... with the family down the street
Through the... courtesy of Fred's two feet!
When you're... with the Flintstones
Have a Yabba-Dabba-Doo time!
A Dabba-Doo time!
We'll have a gay ol' time!
— "Meet the Flintstones", the theme used for the remainder of the show note The first two seasons used an instrumental theme.
Advertisement:

The most famous and beloved of Hanna-Barbera's cartoons that isn't Scooby-Doo, this one was set in the Stone Age — sort of — and based about half its humor on prehistoric versions of modern technology and culture. Usually an animal was shown rigged to perform some menial task, e.g. a baby mammoth used as a vacuum cleaner, a parrot used as a recording device, etc. The animal then usually makes an Aside Comment about their lot in life.note Said comment is usually either a bad pun or some variation on the phrase "It's a living!"

The other half was your typical sitcom material, springing from the antics of boorish Fred Flintstone — based on Ralph Kramden in The Honeymooners — who was constantly hatching insane schemes with his diminutive neighbor Barney Rubble and subsequently getting them both into trouble with their wives, Wilma and Betty. Later in the series the Flintstones had a daughter, Pebbles; this inspired the Rubbles to adopt a son, the comically super-strong Bamm-Bamm. Dino and Hoppy were the respective family pets.

The original series, which aired for six seasons (1960–66) on ABC, was the most successful prime-time animated show ever until The Simpsons debuted in 1989. The latter broke the former's record with the season eight episode "The Itchy and Scratchy and Poochie Show" and for syndicated reruns, the opening Couch Gag has the Simpsons finding the Flintstones already sitting in their living room. The Flintstones was also the first animated sitcom to be nominated for a Primetime Emmy, which opened the door for a lot of animated sitcoms (mostly Family Guy and The Simpsons) to have the same opportunity. The show was also the first to have an animated character (Wilma) be openly pregnant. Of course this was probably the result of something else that no other TV show since about 1948 had done: Wilma and Fred were shown sleeping in the same bed, together.

Like many very popular shows from the 1960s and '70s, The Flintstones just would not die. The original series has continued in syndicated reruns for decades, and its characters have lived on in any number of subsequent forms, from Saturday morning cartoons featuring teenaged versions of Bamm-Bamm and Pebbles (the latter voiced by Sally Struthers) through a pair of live-action motion pictures, all the way to a breakfast cereal which is still marketed in the early 21st century (and which is the occasion for continuous new Flintstones animation), plus the chewable vitamins. The year 2016 in particular saw a resurgence of the franchise in multiple media: first, a Chinese bootleg of the NES game The Flintstones: The Rescue Of Dino & Hoppy received Memetic Mutation on the Internet (especially the theme song) thanks to the works of Vinesauce and SiIvaGunner. That game actually received a sequel on the NES, The Surprise of Dinosaur Peak!. Unrelated to both, the series also got the same year a Darker and Edgier reboot as comic book published by DC Comics.

an Elizabeth Banks-produced Distant Sequel, Bedrock, had been picked up by Fox and would be jointly produced by Fox Entertainment and Warner Bros. Animation.

open/close all folders
A to I
J to P
R to Z
Flintstones! Meet the Flintstones!
They're the modern Stone Age family!
From the... town of Bedrock
They're a page right out of history!
Someday... maybe Fred will win the fight
Then that... cat will stay out for the night!
When you're... with the Flintstones
Have a Yabba-Dabba-Doo time!
A Dabba-Doo time!
We'll have a gay ol' time!
We'll have a gay ol' time!!
Fred: "WIIIIILLLLLMAAAAAAA!!!"
Feedback