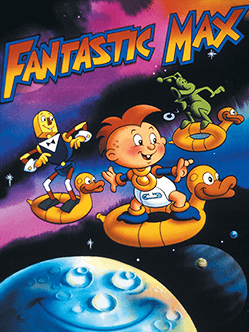 "FANTASTIC MAX!
“WELL Along Came Max, and the fun times started; I’d laugh until I cry!
He’s Dynamite in those four-ply diapers, he’s my kinda guy!
Well there goes Max, on a big-time mission; will he lose or win?
Yes it all depends on the four-ply diaper, and that safety pin!"
Advertisement:

Space-faring cartoon from the late 1980s, created by Mike Youngnote Who would later go on to form Mike Young Productions, now part of Moonscoop. produced by Hanna-Barbera.

Fantastic Max follows the adventures of 16-month-old Max as he travels through space. Along for the ride is an adorable little alien doll named FX, who has magical powers to boot, and a toy robot nanny named AB-Sitter. The trio have many adventures and travel to many different planets.

Fantastic Max originally aired on Sundays as part of the two-hour cartoon block The Funtastic World of Hanna-Barbera. The first episode aired September 11, 1988, and the last episode aired on February 1, 1990.

While performing stand-up comedy, Loon keeps making lousy jokes about Martians, unaware that the clubs' owner IS a Martian and doesn't approve of them.

While performing stand-up comedy, Loon keeps making lousy jokes about Martians, unaware that the clubs' owner IS a Martian and doesn't approve of them.