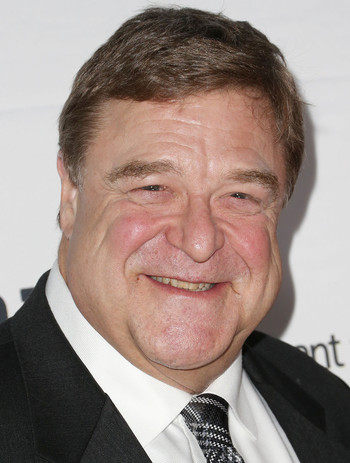 "DO YOU SEE WHAT HAPPENS, LARRY, WHEN YOU FIND A STRANGER IN THE ALPS?!"
"Basically, though, I'm just lucky to love what I do for a living."
Advertisement:

John Stephen Goodman (born June 20, 1952) is an American film and television actor. In his early career, he was best known for playing Dan Conner on the ABC series Roseanne, a role which earned him a Golden Globe Award and seven Emmy Award nominations for Best Actor during his run.

He's known for his large frame (though he has recently lost a considerable amount of weight due to health concerns) and deep, familiar baritone which makes him instantly recognizable. He's a frequent collaborator with The Coen Brothers, and is otherwise incredibly prolific to the point of being iconic.

In addition to his many accolades for his acting, a recent article

on FiveThirtyEight suggested, with considerable supporting analysis, that he is the greatest supporting actor of modern times.