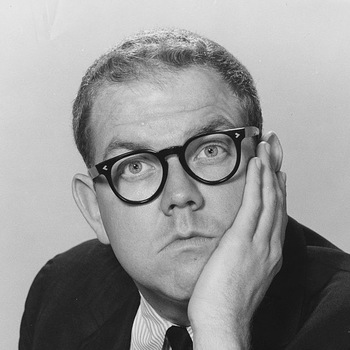 "The decision as to what's funny and what is not funny shall rest solely with Mr. Freberg."
Advertisement:

Freberg was probably best known for his comedy recordings, most of which are considered classics today. Starting with "John & Marsha" in 1951, Freberg created a seemingly-endless string of hit novelty records, in which he did parody versions of popular songs of the day (including "Sh-Boom", "The Yellow Rose of Texas", "Heartbreak Hotel", and "The Banana Boat Song") and satirized such figures as Lawrence Welk. His 1951 "St. George and the Dragonet", in which St. George channels Jack Webb's Joe Friday in his attempt to arrest a dragon on a rampage, was a #1 hit and launched Freberg into the public eye. (He would eventually make no less than four Dragnet parodies, turning it into something of a trademark for his work.) Freberg also created the seminal audio work Stan Freberg Presents the United States of America (1961) about the founding of the USA, and the musical comedy parody/coffee commercial Omaha! (1958).

The Stan Freberg Show), Freberg never backed down from potentially controversial topics. "The Old Payola Roll Blues" was a two-part double-sided narrative that (prematurely) celebrated the demise of rock'n'roll music in the wake of the payola scandals of the 1950s, for instance. Politically-themed sketches from his radio show were often censored by network executives. And his famous 1958 recording "Green Chri$tma$", which viciously skewered the overcommercialization of Christmas, was almost suppressed by a record company terrified of offending powerful advertising agencies. "Los Voraces (The Greedy)" slammed both Las Vegas' opulence and the Cold War.note The ending, in which two battling casinos (the El Sodom and the Rancho Gamorrah) escalate to detonating a nuclear bomb on stage, which of course destroys the city, was changed to an earthquake in the broadcast. This original ending is now available.

Freberg later skewered censorship in "Elderly Man River", which pioneered ahead the comedy of Political Overcorrectness by decades with a censor who forces him to change the lyrics of "Old Man River" until it becomes an unrecognizable mess. "Point of Order" mocked McCarthyism

, leading to an executive asking if he'd ever been "part of any groups the Attorney General wouldn't like", which led in turn to Freberg jokingly replying, "Actually, I've been a member now for many years of—" the executive turns purple "—the Mickey Mouse Fan Club." Despite this, it was still broadcast. One of the Dragnet parodies, "Little Blue Riding Hood", previously had a veiled reference to McCarthyism as well: "Only the color has been changed to protect the record." Freberg also had difficulties because he refused to accept sponsorship from tobacco and alcohol companies. The combination of his moral stand on advertisers and a network nervous about his politically-tinged humor eventually forced his second radio show off the air after a mere 15 episodes.

Many other will recognize Freberg's voice work on various vintage Warner Bros.' Looney Tunes cartoons, where he played Tosh of the Goofy Gophers, the dimwitted Pete Puma, and the even more dimwitted Junyer Bear. He's famously the only actor other than Mel Blanc to get a solo credit on a WB cartoon, with The Three Little Bops (Freberg did all of the voices in this short, so it didn't make sense for Blanc to be credited in a cartoon he wasn't in).

Although he would continue acting in films (including a cameo in It's a Mad, Mad, Mad, Mad World) and on television (The Monkees, The Girl from U.N.C.L.E. — more recent audiences will know him as "Mr. Parkin" from Roseanne), Freberg's greatest contribution to television was as a creator of advertising.

After leaving radio, Freberg moved into the field of advertising — carrying his sense of humor along with him and applying it to the commercials he made. This was a revolutionary development — before Freberg, commercials had never been funny (at least, not intentionally). Ad agencies and their products were deadly serious, convinced that inviting the viewer to laugh at the commercial meant that they would also be laughing at the product — and would not buy it.

Freberg and his new company, "Freberg, Ltd. (but not very)" note (motto: Ars Gratia Pecuniae –- "Art for the Sake of Money") turned this staid, petrified attitude on its head with a series of innovative advertising campaigns that, for the first time in television history, were intentionally humorous and often poked a little sly fun at their own expense. In Freberg's hands, commercials became entertainment for the first time, instead of simple attempts to convince customers to buy. From his "Who put eight great tomatoes in that little bitty can?" for Contadina tomato paste to Ann Miller's showstopping production number for Heinz soups

, Freberg proved that humor made a commercial — and thus its product — memorable.

His commercials were also the first to play with and subvert the tropes and cliches that advertising had already accumulated by the 1950s. A prime example would be his famous "Nine out of ten doctors recommend!" ad for Chun King Chinese food, featuring nine smiling Asian doctors, and one frowning white doctor. Eventually Freberg would win 21 Clio awards

note Advertising's equivalent of the Emmys (TV), Oscars (Movies), or Grammys (Music) for his work in advertising, work which genuinely revolutionized the field. Freberg's willingness to buck the "conventional wisdom" of the advertising agencies in the 1950s is directly responsible for decades of amusing, entertaining and — most of all — memorable commercials. Remember him the next time you enthuse about Super Bowl ads, or when you ask a coworker, "Did you see that commercial where...?"

Was a major influence on "Weird Al" Yankovic, who had the great pleasure of working with him on occasion, such as Al's short-lived TV show, where he played Papa Booley (a puppet sidekick to the old, crazy kids' show host Fred Huggins, played by Al) and the exec who gave Al the show in-universe.

For a more detailed biography of Stan Freberg, see That Other Wiki.