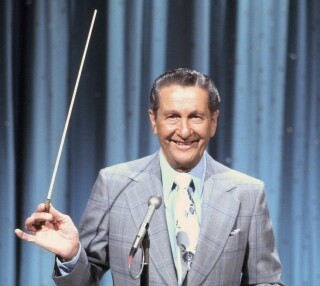 A-one, and-a-two...
"For a while we had trouble trying to get the sound of a champagne cork exploding out of the bottle. I solved the problem by sticking my finger in my mouth and popping it out."
Lawrence Welk
Advertisement:

Lawrence Welk (March 11, 1903 – May 17, 1992) was a popular Big Band orchestra leader best known for The Lawrence Welk Show, a variety and music program broadcast on American television for thirty-one years.

Born in rural North Dakota to German-speaking immigrants from Russia, Welk began his career as the accordion-playing frontman to a big band that toured the US back in the 1930s. During a stop in Pittsburgh, he found himself the owner of a bubble machine, which he cannily turned into his band's trademark - "champagne music", he called it, and his female singer was dubbed the "Champagne Lady". After World War II, he settled in California and, in 1951, began his television career with a one-hour show on KTLA. The Lawrence Welk Show, filmed at the Aragon Ballroom in Venice Beach, gained a devoted audience who loved his conservative musical tastes and quirky use of the English language, and was soon picked up by the network.

Right from the beginning he found himself the target of satirists such as Stan Freberg, whose ferocious sendup of the bandleader hurt him. (Freberg parodied Welk's poor English using the phrase "wunnerful, wunnerful", which Welk denied he'd ever said. Years later, though, he used it as the title of his autobiography.) He was later parodied in MAD magazine and on Saturday Night Live and SCTV.

Although audiences knew him as the fatherly host with a quirky grasp of the language, he could be a stern taskmaster when dealing with performers. He famously fired one Champagne Lady for "showing too much leg", only relenting when fan mail poured in supporting the singer (whose offending outfit had been ridiculously modest even for the time). He also spent many years in a battle royale with the father/agent of the Lennon Sisters; Welk wanted to pay them as a single act, whereas Mr. Lennon insisted they be paid as individuals. The Lennons won, but only because Welk felt immense guilt over one of the sisters acquiring an unstable stalker after her appearances on the show. (The stalker, believing himself to be Peggy Lennon's rightful husband, would eventually murder the father, which became another source of guilt for Welk and caused him to feel as if he was in loco parentis in some form for the girls.)

Tastes in popular music changed, but Welk's show and his didn't; corny and quaint even by the standards of The '50s, Welk kept his eponymous show on the straight and very narrow through the Sixties and Seventies and well into the Eighties, long past the time of rock and rebellion. His interpretation of "old-fashioned modesty" could sometimes seem outlandish even to a conservative of the time; when the Lennon sisters began having families of their own, he devised bizarre stage sets to hide their lower bodies (behind fences, prams, kitchen counters, etc.) to prevent the audience from seeing that these devout Catholic married women were pregnant. The only black people to appear on the show were tap dancers, a fact decried by both blacks and whites at the time. (Gregory Hines later pointed out, though, that the Welk show was the only place on television where tap was shown at all.)

It was a popular belief in the 1970s that Welk was a "phony" — that his entire persona, including his difficulties with English and his apparent social conservatism, was a calculated ruse. Much of this belief arose from Welk's wavering accent, which seemed to be stronger on the show than in interviews, and his varying answers about his family's heritage. In reality Welk started out with a very strong accent and a poor grasp of English idiom, as his parents didn't speak English and his record at school (the only place he had heard English as a child) was spotty to poor. Stan Freberg's satire stung him into hiring an English tutor, but he soon found that his audience didn't want him to speak well; they preferred his old accent, so he "forgot" his lessons while on the air. As for his ancestry, it was difficult at the time for any performer to admit that his parents had immigrated from Russia, even if they were (like Welk's) Volgadeutsch who had left decades before the Revolution. Like many other actors and musicians, he prevaricated and said instead that his ancestors came from Alsace, which (if one went back far enough) was strictly true.

Although his own accordion skills were considered weak, Welk was adept at recognizing talent in other musicians and (unlike his treatment of singers) he didn't mind paying for it. Pete Fountain and Johnny Hodges were among the many instrumentalists who spent a good portion of their career in Welk's band. That said, Welk could be so clueless about contemporary rock music that he once arranged a cover of the drug song, "One Toke Over the Line," by the folk rock duo, Brewer & Shipley, played on his show because he thought it was a spiritual piece. Gregory Hines also credited Welk's show for his own interest in tap dancing and jazz music, admitting in an interview that he would "secretly" watch the show when his grandma had it on, hoping that his friends wouldn't know that he wasn't just an unwilling viewer.

The Lawrence Welk Show finally went off the air in 1982 due to Welk's own declining health. His investments in real estate and music publishing made him one of the wealthiest men on television by the time he retired. By the time he died in 1992 he was also the owner of numerous "resort communities", one of which he lived in; after his death, his band moved to Branson, Missouri, eventually opening the Lawrence Welk Theater there. And even today, some PBS stations show reruns of The Lawrence Welk Show.