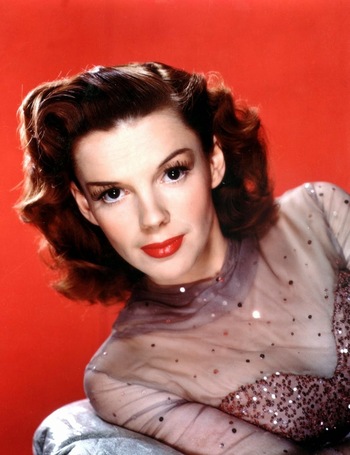 Judy Garland (born Frances Ethel Gumm; June 10, 1922 – June 22, 1969) was an American actor and singer who had huge success during The Golden Age of Hollywood, mostly known nowadays for her role as Dorothy Gale in the 1939 movie The Wizard of Oz.

She began her film career as a child performer in a group called the Gumm Sisters, before being signed with MGM in the 1930s. According to Garland and her biographers, her mother was a cruel Stage Mom who pushed her into performing from a very young age and forced her to take both sleeping and diet pills, but many of her unpleasant memories of her mother may be fabricated or embellished.

Her producers were harsh to her, encouraging her to take amphetamines to work longer hours. They also told her she wouldn't be as beautiful as her other co-stars, and Louis B. Mayer (the second M of MGM) frequently referred to her as "the fat one" or "the Hunchback". Probably because of this, she fell into drug addiction quite young.

Garland was married five times before her death at the age of 47 due to a drug overdose. From her marriage to filmmaker Vincente Minnelli (with whom she made three films), she had a daughter, Liza, herself an accomplished performer. Her daughter by Sidney Luft, Lorna, is also an actress.

She has ascended into pop culture as a gay icon, owing in no small part to the fact that much of her early life mirrored that of many gay men - and it probably helps that she regularly socialized with gay men, often accompanying them to gay bars. The use of the rainbow as a symbol for gay culture is probably due in some part to Garland's song "Over the Rainbow" in The Wizard of Oz. According to her daughters, she would have loved that.

Productions Judy Garland was involved in include: