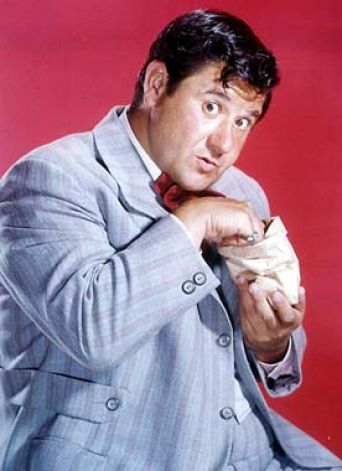 "If you have the right voice and the right delivery, you're cocky enough, and you pound down on the punch line, you can say anything and make people laugh maybe three times before they realize you're not telling jokes."
Advertisement:

Hackett grew up in Brooklyn, living next door to future Dodgers pitcher and Baseball Hall of Famer Sandy Koufax. He served in the U.S. Army during World War II as part of an anti-aircraft battery.

His career as a comedian began after the war, when he performed at a nightclub in Brooklyn and on the Catskills Borscht Belt circuit. It was there that he officially changed his name from Leonard Hacker to Buddy Hackett.

Through the years, Hackett has appeared on Broadway, performed stand-up comedy on stage, and starred in several movies and television shows spanning five decades. During those times, he also made guest appearances on talk shows, like those of Jack Paar, Arthur Godfrey, and Johnny Carson, and appeared on the game shows What's My Line? and The Hollywood Squares. He was the second host of You Bet Your Life.

Hackett died at his beach house in Malibu, California, on June 30, 2003, due to complications from diabetes. His son, Sandy Hackett, has been starring in film and television after his father's death.

His roles in film and TV include:

Buddy Hackett is associated with these tropes: