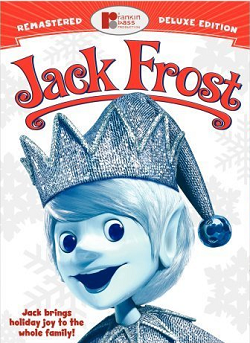 In this 1979 Rankin Bass winter special, reporters from all over the USA are gathering to see Pardon-Me Pete, the groundhog that does the whole Groundhog Day thing. He sees his shadow and runs back inside, but wait! There's no sun to make any shadows! Cut to inside the burrow, where Pete talks to the camera. He decides to explain all about a little agreement he has with Jack Frost...

Jack Frost (voiced by Robert Morse) is the personification of winter, who uses his icy breath to bring ice and snow to the world. One day, as he's swooping invisibly through the town of January Junction, he overhears a conversation in which a young woman named Elisa playfully tells her family that the only person she's in love with is him.

Father Winter allows him to become human, but warns him that he has until the first day of spring to win his wife and provide her with a house, gold, and a horse, or he must return to sprite form. Jack is sent to January Junction in the human guise of Jack Snip, a tailor.

Largely unrelated to the prior Rankin-Bass version of Jack Frost, who was the Paul Frees-voiced villain in 1976's 2D animated Frosty's Winter Wonderland and returned in Rudolph and Frosty's Christmas in July, released just a few months prior to the Jack Frost special.

Jack Frost feels lonely with his abilities as a ghostly winter sprite and wishes he were human.

Jack Frost feels lonely with his abilities as a ghostly winter sprite and wishes he were human.