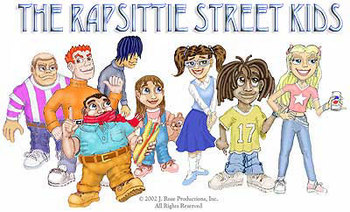 Be warned; the movie looks nothing like this. It somehow looks even worse.
"Every now and then an animated program comes along that seems destined to become a classic. "The Rapsittie Street Kids" franchise is such a project. Featuring a one hour musical animated special entitled "Believe in Santa" it is the first of two holiday one hour specials that features the rambunctious, cool and cute "The Rapsittie Street Kids." The music sound track is being released to radio to coincide with the Christmas TV Syndication window."
— Promotional pitch for the movie. None of it is true.
Advertisement:

Rapsittie Street Kids: Believe in Santa is a CGI musical Christmas special that aired once during the 2002 holiday season in syndication and on WB+ (a prepackaged channel for smaller markets). Since it never aired again after that, it was considered to be lost for over a decade. It finally resurfaced on the Internet in 2015 to widespread mockery for its extremely poor quality, most notably its unfinished, stiff, dated (even for its era) computer animation. The plot of the special focuses on a spoiled rich girl named Nicole (Paige O'Hara) throwing away a teddy bear given by one of her classmates and later scrambling to find it after learning of its sentimental background. The movie can be found here

Yes, this woman is indeed a gold mine for memes and comedy.

Yes, this woman is indeed a gold mine for memes and comedy.