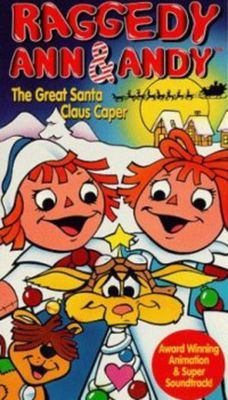 The Great Santa Claus Caper is a Christmas Special that first aired on CBS in 1978, animated by Chuck Jones.

It concerns the adventures of Raggedy Ann (voice June Foray) and her friends Raggedy Andy (voice of Daws Butler) and Raggedy Arthur as they must save Christmas from a Well-Intentioned Extremist and Insufferable Genius, The Big Bad Wolf himself Alexander Graham Wolf (voice of Les Tremayne), who intends to encase all of the world's Christmas toys in a fast-hardening clear substance he calls "gloopstik" because he believes children are irresponsible and will break their toys otherwise (at least, this is his original motive; see Motive Decay below).