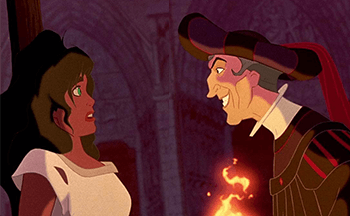 The downside to being Ms. Fanservice is, occasionally, you get the wrong attention from the wrong sources.
"Just fear me. Love me. Do as I say, and I shall be your slave."
— Jareth the Goblin King to Sarah, Labyrinth
Advertisement:

This trope applies whenever a villainous character has romantic and/or sexual feelings for a heroic one.

If this crush takes a turn for the perverse (and most such crushes tend towards this), this can lead to tropes like I Have You Now, My Pretty, Forceful Kiss, Bathe Her and Bring Her to Me, And Now You Must Marry Me, Scarpia Ultimatum, and Go-Go Enslavement where the villain tries to force their desires upon the character, although none of those require a Villainous Crush. Additionally, the villain may become a Stalker with a Crush. If the crush itself is a motivating factor in their Start of Darkness, then it's Love Makes You Evil.

This trope isn't always negative, though. This trope can conversely be a very humanising trait for an Anti-Villain. The heroic character may become a Morality Pet, and can be fairly certain that their villainous admirer will never harm them or allow harm to come to them, barring certain exceptions. They may even step in to protect them from other villains who have fewer compunctions. Taken all the way, it may become Love Redeems and/or Defecting for Love if the villain choses to switch sides to be with his crush.

If the feelings are mutual or an actual relationship develops, then it's Dating Catwoman instead. When this is purely subtextual, see Foe Romance Subtext. The specific variant when the Evil Empress captures the hero to seduce him is Villainesses Want Heroes. Not to be confused with Foe Yay Shipping, which are purely audience reactions. Sometimes overlaps with Bigot with a Crush, if the bigot is depicted as a villain.

Contrast All Girls Want Bad Boys and Reformed Rakes. Though the former can overlap if the hero the villain admires is an Anti-Hero.

Believing that having a good woman as his wife will motivate him to fight harder, General Deathzero sets his sights on Spielban's cute sidekick Diana.

Believing that having a good woman as his wife will motivate him to fight harder, General Deathzero sets his sights on Spielban's cute sidekick Diana.