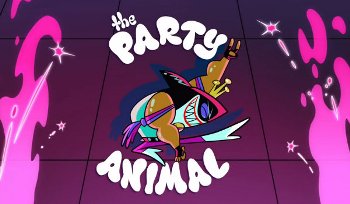 When Emperor Awesome prepares to party a planet to bits, it's up to Sylvia to stop him. 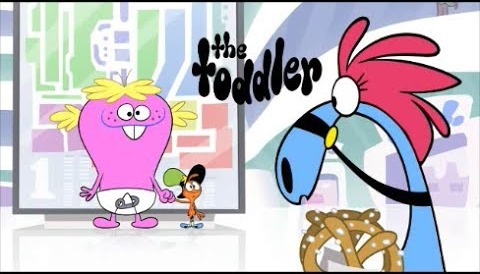 Wander and Sylvia are in a planet-sized mall. They consult the "You Are Here" sign to get their bearings and discover that the nearest exit is three days away. Sylvia heads over to a concession stand to get supplies. When she returns, she discovers Wander has befriended a giant pink, blonde, bediapered toddler he has taken to calling Huckleberry Knucklehead.

Sylvia decides that the only way to get the kid off their hands is to drop him off at security or, failing that, find his parents. Wander agrees, but the pair have dramatically different ideas about how to get the child to come along with them. Wander's, predictably, is free-form fun: let the child do as he wants. Sylvia's approach is more strict and sensible. Knucklehead, of course, prefers Wander's approach. Sylvia gets stuck with the bill as Wander feeds the kid lollipop after lollipop the size of Wander's own head.

They find a pair of aliens who look just like Huckleberry Knucklehead from the back, only to find they're snide teens, offended and disgusted at being considered adults, let alone parents. Wander and Sylvia are accused of being awful parents. Wander takes umbrage at the insult; Sylvia simply points out they're not his parents. The child tuckers out from the sugar rush wearing off and the chase all over the mall, falling asleep on Sylvia and crushing her. This leads to her and Wander getting into a whispered argument about whose approach with the kid is more effective. But despite keeping their voices down, the argument wakes Huckleberry and he runs off, upset that they're fighting.

The child leads them all over the mall until they corner him on an upper level. He's about to lean too far back and fall! Wander suddenly changes his tack and strictly tells the giant alien baby "No!". Syliva flips her tactic as well and picks up Wander, brandishing him at the kid and going "Look! Lollipop!" The crowd that has been watching and screaming in terror cheers as the pair lead the giant baby back to the Security desk — where his parents have finally showed up: two tiny little bugs.

They're delighted to have their baby back (surprise: his name really is Huckleberry Knucklehead) and hope he hasn't been too much trouble. Wander says the kid was no problem at all just before the baby shoves him into his mouth and Sylvia scolds him to drop it.