Bathe Her and Bring Her to Me 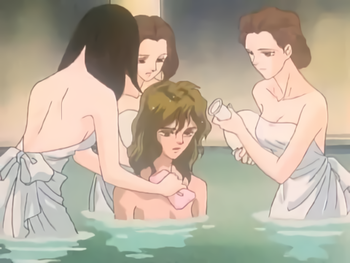 "Dammit. Not only will Baron Eselschwanzed be having his way with me later, but this shampoo's lilac-scented.
I hate lilac. Well, at least the water's warm..."
Count Drusus Beausoleil: Shall I have her bathed and brought to your quarters, then? Mu ha.
Du Quay: Tch. Drusus, you really need to stop reading those Othar Tryggvassen adventure novels.
— Girl Genius
Advertisement:

The villain has the lovely damsel right where he wants her. His plans for her at this point will likely involve putting her in Go-Go Enslavement, invoke ''ius primae noctis'', and possibly giving her a Sadistic Choice between preserving her virtues and preserving the life of that insufferable do-gooder she calls her true love...

...but first, it looks like she could do with a nice hot bath! He has his servants (hot maidservants usually, or failing that, eunuchs) take her away to be cleaned up and groomed properly. Bonus pervert points if he then watches them strip and bathe her via hidden camera, two-way mirror, peephole, Crystal Ball, or the like.

Justified in pre-modern settings, since in many societies throughout history, bathing had been a luxury which only the upper classes could afford themselves and the heroine should be expectably dirty. In less adult-oriented media, the bathing is just to make sure she'll look nice in her wedding dress.

Compare She Cleans Up Nicely and sometimes No, Mr. Bond, I Expect You to Dine. Related to, but not necessarily the same thing as, Go-Go Enslavement. Undressing the Unconscious may occur if the character is bathed while they're unconscious. Can precede a Shameful Strip if no clothes are provided following the bath. May go hand-in-hand with And Now You Must Marry Me and Sex Slave.

An Important Notice: Please remember folks, that bathing or at least some mention of bathing is a key element to qualify as an example of this trope. Thank you, carry on.

Not to be confused with Bring Him to Me... Except when it can be. And being a Bathing Beauty is not a pre-requisite for this treatment either.

Ja'far has his wife stolen away from him by the Sultan.

Ja'far has his wife stolen away from him by the Sultan.