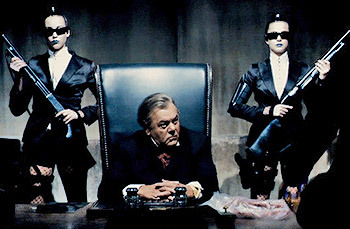 Sometimes, the Big Bad of a story will have their most elite defenders be composed of exclusively female and very often attractive warriors.

Occasionally, however, it would be the hero (or a supporting character on the good side) who has Bodyguard Babes, at which point it's almost mandatory that Hilarity Ensues via an Unwanted Harem situation.

Unsurprisingly this is most common when the one being defended by the Bodyguard Babes is male.

In short, Praetorian Guard recruited from an Amazon Brigade. See also Battle Harem and Paid Harem. Ninja Maid is a more specialized subtrope. Compare Bridge Bunnies when the women are the main force behind the scenes.