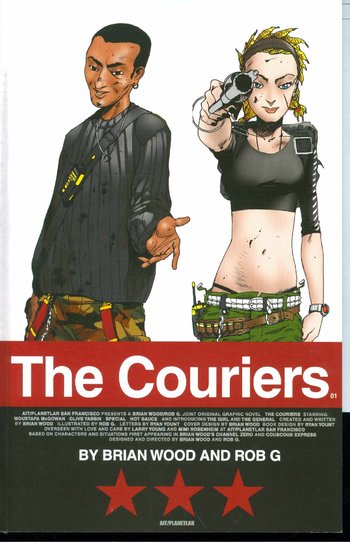 The Couriers is the first comic series by Brian Wood, later to become more famous with titles like Northlanders, Demo, DMZ and Local. Many of Wood's later works are known for their serious and downbeat treatment of violence and its consequences. The Couriers... Er, Not so much.

The series started with what was meant to be a one-off graphic novel, Couscous Express, with art by Brett Weldele. Wood then produced three further graphic novels about the same characters with art by Rob G: The Couriers, Dirtbike Manifesto, and The Ballad of Johnny Funwrecker. They were all originally published by AiT/Planet Lar, but a 2012 combined volume came out from Image Comics.

The series revolves around Moustafa and Special, two young "couriers" who specialise in the kind of loads that normal courier companies don't handle because they are illegal, or so in demand that they're likely to attract every gunman in town to try to steal them at gunpoint. Usually, it's both. Oh, and they also do general bodyguarding and occasionally just shoot people for money.

The Couriers provides examples of: