King of the Homeless 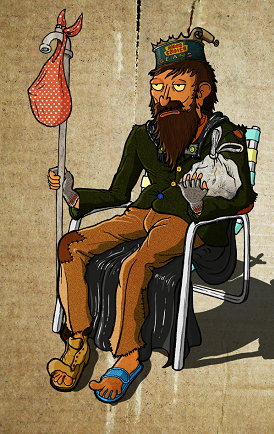 You will address him as "Your Homelessness".
"All hail the Hobo King."
Advertisement:

This character is the leader or even "king" of all the homeless, indigent, and castoffs in a city. Either by dint of age, respect, or obstinate madness he has authority over the homeless. The king may be a crime boss type, a mayor who keeps their society running, The Fagin leading a group of street urchins, or an actual king who holds court. Regardless of how much wealth he has, he always stays purposefully poor and in a homeless lifestyle.

More often than not, Muggles in the know will respect him and even ask him for help or Wisdom from the Gutter, assuming he doesn't have a higher education equivalent knowledge. Usually these guys are also suffering a mental illness that makes them a Cloud Cuckoo Lander. However, an especially beloved king (it helps if they aren't violent) may have their delusion humored by a whole city.

See also/compare The Fagin and Wasteland Elder. For a normal king who is now homeless, see Fallen Princess. This trope is almost Always Male, hence the use of masculine pronouns.