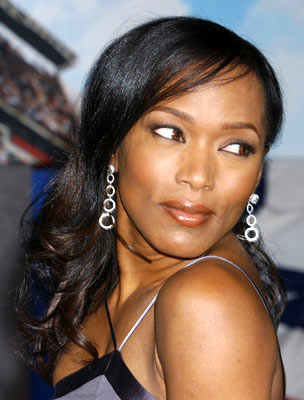 Angela Evelyn Bassett (born August 16, 1958 in New York City) is an American actress. She has become well known for her biographical film roles portraying real life women in African American culture, including Tina Turner, Betty Shabazz, Rosa Parks and Katherine Jackson; into her fifties and beyond, she has become one of Hollywood's premier go-to actresses for the Black Boss Lady trope.
Advertisement:

She was born in Harlem, New York and moved to St. Petersburg, Florida as a child. She has a bachelor's degree in African-American Studies and a Masters in Fine Arts from Yale University. Her rise to fame came with her roles in Boyz n the Hood and Malcolm X. She was nominated for an Academy Award for her performance as Tina Turner in What's Love Got to Do with It, and was the first African-American to win a Golden Globe for Best Actress in a Motion Picture Musical or Comedy.

She's married to Courtney B. Vance. The two appeared as husband and wife on ER.