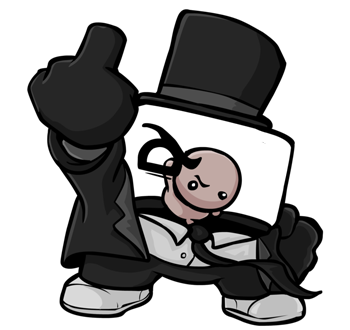 Yeah, that fetus is flipping you off.
Cameron: What happened?
Kim: I was scanned. The woman in the waiting room...
Cameron: She scanned you?
Kim: No, not her. Her child. Her unborn child scanned me.
— Scanners
Advertisement:

The only thing creepier and more dangerous than the Enfant Terrible. The Fetus Terrible hasn't even been born yet, but will become The Antichrist or a demon prophesied to bring about The End of the World as We Know It once it escapes from its womb. The woman carrying this (often literally) hell-born spawn is usually an innocent, unwittingly impregnated by the Devil himself, and the other characters have to race to prevent the birth or stop the child from becoming the ultimate Enfant Terrible. Occasionally this can result of a perfectly normal pregnancy Gone Horribly Wrong pre or post conception, where the issue can be a mutant, Hybrid Monster, Undead Child or some other abomination. This trope can also overlap with Womb Horror, especially if the mother knows what's growing inside her.

Worth noting, not all examples are "evil", several are more among the lines of a Non-Malicious Monster.

Sub-Trope of Superior Successor, in cases where this isn't usual for the species.