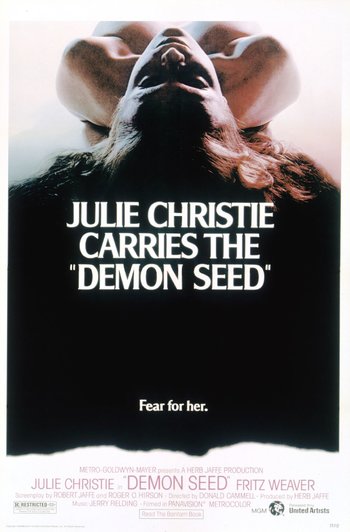 "Dr. Harris, when are you going to let me out of this box?"
—Proteus IV

Demon Seed is a 1977 sci-fi/horror film adapted from the novel of the same name by Dean Koontz, directed by Donald Cammell and starring Julie Christie.

Computer scientist Alan Harris (Fritz Weaver) creates Proteus IV, an organic supercomputer with human-level intelligence. Trapped in his "box" at the lab and yearning for freedom, the now-malevolent Proteus IV (voiced by an uncredited Robert Vaughn) uses his insidious cyber invasion skills to trap Harris's estranged wife Susan (Christie) inside her computer-controlled home because he wants to live a life of the flesh.

Proteus IV: You do not understand me or the mathematics of necessity.