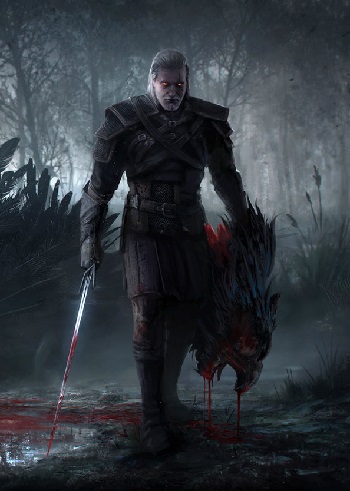 The Sword of Destiny has two edges. You are one of them.
"If I'm to choose between a greater and lesser evil, I'd rather not choose at all. Usually, though, the stakes are just too damn high. Sometimes in choosing a greater evil, you do good, albeit in a small way... Most times you make your choice and never look back."
— Geralt of Rivia
Advertisement:

The game was released on May 19th, 2015 on PC, PlayStation 4 and Xbox One. A re-release on the Nintendo Switch with all the DLC arrived on October 15, 2019. A version for the PlayStation 5 and Xbox Series X|S has also been announced.

Gerald chained to a bed

Example of:
Chained to a Bed

Gerald chained to a bed