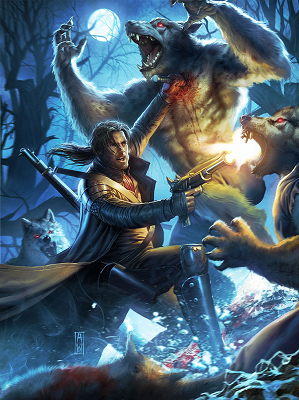 Survivor: We're going to die here, aren't we?
Demon Hunter: No. Because as long as I'm here, they are the prey... and I am the hunter!
— Diablo III, Demon Hunter trailer

This character has embarked on a Hunt, a mission to eliminate all monsters in the world, dedicating their life to killing supernatural beings.

Whether this Hunter of Monsters is good or evil depends on how sympathetic the audience is supposed to feel towards their prey. Naturally, we see a hunter chasing our protagonist as wrong, but almost all hunters wrestle with some kind of fanaticism. Chasing a "good" version of their prey gives the character a chance to resolve that fanaticism, and potentially confront He Who Fights Monsters. Those who are "good" will often leave some examples of their prey alone because that person isn't evil like the rest. Others don't care about good and evil and consider all monsters to be beyond redemption, leading to Van Helsing Hate Crimes. And then there's the occasional one who feels that all monsters are beyond redemption and is absolutely right, despite protests from those less knowledgeable about these monsters.

The Hunter of Monsters seeks prey out of the following motivations (these may overlap):

There are plenty of potential overlaps with other tropes:
A Hunter with no fixed home is probably also a Knight Errant, regardless of whether or not they hold an actual noble title. If they use magic, they may be a Blue-Collar Warlock. Groups or organizations that specialize in killing monsters are a Creature-Hunter Organization. A monster choosing to hunt their kind is a Hunter of His Own Kind.

Contrast with Occult Detective (an investigator of supernatural mysteries), plus Nazi Hunter and Vigilante Man (the character hunts human "monsters").

Not to be confused with Classical Hunter, who goes after regular game. Although depending on the genre and setting, "regular" and "supernatural" game might indeed be the same.