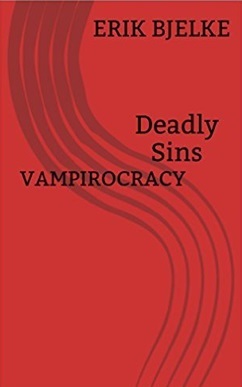 "I'd dreaded this day ever since the new Vampire King of America had 'invited' all the Hunters in the country to his little pow-wow in DC. That's what he'd called it, an 'invitation.' I'd called it being rounded up."
— Leon Ragnarson
Advertisement:

Vampirocracy: Deadly Sins is a self-published e-book for Amazon Kindle. It follows Leon Ragnarson, a Vampire Hunter who works with the police investigating supernatural crime while running a private investigation firm, also specialized in supernatural cases.

As the title may suggest, the government has been taken over by vampires. Deciding that humanity wasn't mature enough to effectively govern itself anymore, the world's vampires took control over every government in the world literally overnight. Since then, all manner of supernatural beings have been accorded full legal rights, and many of them hold positions of power in the new vampire-run government. And things are going surprisingly well, considering all important decisions are now made by the undead.

Leon, unlike many of his fellow Hunters, took the Vampirocracy up on their offer to work with the new government, investigating supernatural crime. Deadly Sins follows Leon as he investigates a series of murdered vampires, trying to find the person murdering them. Simultaneously, he deals with an unexpected visit from a very unwanted ex-girlfriend, who has a case for his PI firm, while seeking help from lovely young Wiccan Amy to answer some questions about unusual abilities Leon seems to possess.

Intended to be first in a series.