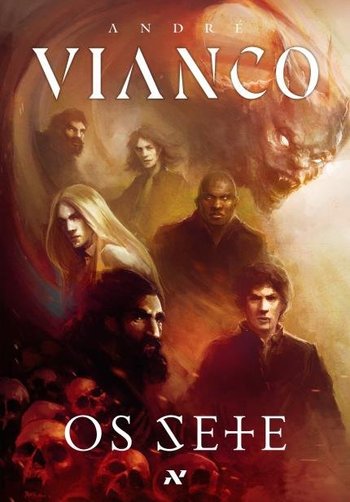 Clock-wise from the left: Sétimo, Espelho, Tempestade, Lobo, Gentil, Acordador. Center: Inverno
When water floods your streets
When ice freezes your blood
Start running, use your fastest steed
And prepare to know the Seven
For they will perform the most bizarre spectacle on the Earth
Advertisement:

Vampiros do Rio Douro ("Vampires of the Douro River" in English) is a novel series written by André Vianco and the Brazilian take on vampire literature. The first book Os Sete (The Seven) was published in 2000 and followed by more five books and a two-volume graphic novel. It starts when a group of explorers finds a sunken Portuguese ship at the literal coast in Southern Brazil with seven caskets made of silver with corpses inside of men accused of witchcraft. Turns out these coffins were prisons for seven powerful vampires from Portugal who begin to spread terror on Brazil after they are unwittingly released by one of the students and it's up to a student group to stop the vampires' onslaught.