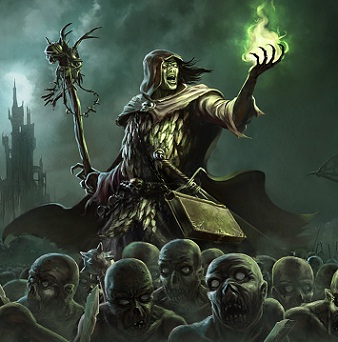 Unlikely to be one of the good guys. But you never know.
Image

Hooray, you've got super powers! Your dreams of becoming a hero and making the world a better place are one step closer to coming true! Only, wait a minute... why do your powers revolve around raising the dead as zombies, or causing another person's muscles to atrophy, or overriding someone's nervous system so that they feel nothing but pain?

Let's face it: there are some powers that just aren't conducive to superheroics. Necromancy? Not so much. Toxic kiss? No. Inducing terror? Hardly. Life-draining touch? Not very likely. Bone tentacles out of your back? No way. Telekinetically tipping cups of milk over? Don't you know how important calcium is?!?

So, if you happen to be on the receiving end of these powers, there seem to be only two logical options:

Surprisingly, more often than not, people with "bad" powers end up picking the latter (and even those that stay good end up being pretty dodgy). And don't even think of using your bad power: when it starts feeling good, you've already fallen off the slippery slope. Even if you use it for good, odds are that you'll become an angst-ridden Anti-Hero. If you're lucky enough not to have the ghastly appearance that tends to accompany the receipt of these powers, you could simply ignore them and go on living a civilian life, but such violations of the Rule of Drama have a strong tendency to fail.

A few such powers aren't even any more truly evil than other powers, but have the same stigma attached; sprays of acidic slime or shards of bone aren't much more damaging than freezing solid, but they're still a Bad Power because they have more of a Squicky organic feel to them. Even "neutral" powers like telepathy can require good Mind over Manners to stay clear of becoming a Puppeteer Parasite.

Compare with Red Right Hand, often goes along with an Astonishingly Appropriate Appearance. This can be derived from ideas about Personality Powers, including how the characters think about the idea. Characters can get "evil powers" because their heart was already dark, or they can turn evil due to their powers, and which way isn't always explained. Often, this goes hand in hand with No Cure for Evil, where evil characters are forbidden the "good powers" of healing. Then again, some settings will use Good Powers, Bad People to show that powers have no inherent morality, and even good powers can be used for evil ends. And, of course, if you deliberately went out of your way to get bad powers...

Lovecraftian Superpower is often a subtrope. Also see Dark Is Evil. Contrast with Dark Is Not Evil and Bad Powers, Good People, where just because the related powers seem innately evil doesn't mean their owner is, and Walking Wasteland, in those cases where the person responsible doesn't mean or want to be an affliction. Very unlikely to be stacked with Light Is Not Good, which is where something that seems innately good turns out to not be so good or even outright evil. This is an extreme form of the Inverse Law of Utility and Lethality, as the power has no use outside of evil.

The rotten, power-hungry Bertrand has the ability to become a monster.

The rotten, power-hungry Bertrand has the ability to become a monster.