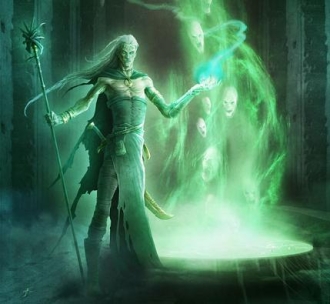 Want a zombie army? Just dial 1-800-REZ-DEAD.
The career of necromancer is an excellent choice for evil-doers who are not a "people person." Though some might say there is not much point to turning the earth into one gigantic graveyard, these people are fools and will never understand anyway. Good career entry points for becoming a necromancer include occultists, dabblers in voodoo, grave diggers, morticians, possessed eight-year-old girls, and inheritors of scary books wrapped in human flesh.
— Neil Zawacki, How to be a Villain

A practitioner of a specific kind of Whatevermancy, Necromancers are the masters of the art of death. Necromancy, the magic of Interrogating the Dead, has been practiced since at least Ancient Greece, where it was known as Necromantia, and probably earlier.

In typical media they're the epitome of the Evil Sorcerer, showing none of the respect Due to the Dead, using The Dark Arts to create an army of skeletons, zombies, undead animals and undead monsters (or any kind of Undead being) to ravage the countryside or enslave souls of the damned for their own evil and twisted purposes. Any villain that practices necromancy is guaranteed to fall hard onto the far side of the evil scale, and any hero who dares to dabble in it can kiss his position on the good side goodbye.

However, necromancy didn't always have the evil connotations that it has in media today. The word necromancy comes from the words nekros (dead) and manteia (prophecy), meaning that necromancers are more likely to summon spirits for divination than armies of rotting zombies. It was widely practiced across the world until the Renaissance when it was equated with demonology and got its bad reputation.

This means that sometimes necromancers are seen in a more sympathetic light, using their powers to commune with the dead, heal others, or use their power over souls for good ends. Most stories involving naive and inexperienced necromancers include the Aesop of how you should respect the cycle of life and death. In other cases, it involves the phrase "Be Careful What You Wish For" when those necromancers try to bring back a loved one. As it usually results in the resurrection going wrong and forcing them to kill their loved one.

But since that's not nearly as interesting as zombies, the idea of a necromancer unleashing waves of zombies still persists. Of course, that doesn't stop them from unleashing the hordes on the bad guys instead!

Commonly overlaps with Necromantic; either someone attempts necromancy in order to bring back their loved one, or this was the start of their descent into evil. Sometimes a character will approach a necromancer for their help in bringing back their beloved (which never ends well).

It's not unheard of for a necromancer to be one of The Undead themselves, often a lich. Even if they aren't liches or other forms of undead themselves, they are likely to have unlocked other ways of prolonging their own lives to unnatural lengths. Furthermore, they may become partially undead.

Since necromancers are typically seen animating not only still-fleshy corpses as zombies but also completely skeletal remains, Fridge Logic may raise the question of why there exists an arbitrary point past which a body is too decomposed to reanimate. After all, if the necromancer's magic can both hold together the bones of a skeleton despite the absence of ligaments and provide it with motor functions despite the absence of muscles, why then does the skeleton suddenly cease to function anyway when those same bones get pulverized by the knight's warhammer? Following this, one might wonder if a necromancer could animate the ashes from an urn, or that hamburger you ate yesterday currently inside your small intesitne.

In another case of Fridge Logic, many writers have recently begun to question whether this form of magic would even be inherently evil in the first place. Depending on the specifics of the setting, it shouldn't logically be any different from repurposing some old worn out shirt that someone else has discarded, for example.

Only metaphorically related to Thread Necromancer, where one resurrects dead forum threads.

See also Animate Dead, Tested on Humans and The Necrocracy. If the necromancer is juxtaposed with a healing or nature-controlling character, see Life/Death Juxtaposition. See also Fossil Revival.