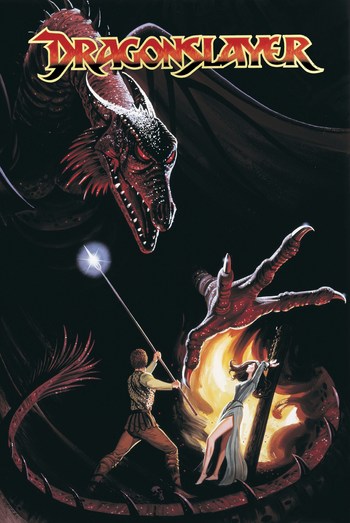 Dragonslayer is a 1981 Fantasy film co-produced by Disney and Paramount studios. A deconstruction of many Sword And Sorcery tropes, the film was considerably darker than the typical Disney movie, which may have caused its commercial failure despite having very good production values for its time.

The movie features a sorcerer's apprentice named Galen Bradwarden (Peter MacNicol), who studied under an old wizard named Ulrich (Ralph Richardson). One day, they are visited by a group of farmers from a distant kingdom named Urland, led by a young man named Valerian. He explains that their land is threatened by a dragon, Vermithrax Pejorative, and that twice each year they feed it a virgin, chosen by a lottery, to keep it from destroying the kingdom. Ulrich agrees to help, but the farmers have been followed by Tyrian, the king's knight. The king of Urland, Casiodorus Rex, is anxious to avoid stirring up the dragon, and Tyrian demands a test of the sorcerer's magic. Ulrich fearlessly allows Tyrian to stab him to death, using his magic to prevent Galen from interfering.

The peasants leave disappointed. Ulrich's elderly assistant Hodge burns his corpse and gathers the ashes in a pouch. Galen starts cleaning out his master's rooms, but then he finds Ulrich's magic amulet. He follows the Urlanders and offers to kill the dragon for them in Ulrich's place. Galen, Hodge, and Valerian set out for Urland to defeat the dragon.

Not to be confused with Falcom's Dragon Slayer games, or Dragon's Lair which not only is a Homonym, but uses the exact same font as the film.