Western Animation / Over the Hedge 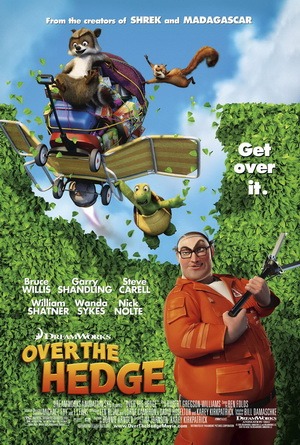 Get over it!
Over the Hedge is a 2006 film released by DreamWorks Animation and loosely based on the comic of the same name.
Advertisement:

It follows the adventure of a handful of woodland animals: a turtle named Verne; a raccoon, RJ; and Hammy, a squirrel are a few of them. The animals have to deal with their home being turned into suburbs. The film stars Bruce Willis as RJ, Steve Carell as Hammy, and Garry Shandling as Verne. The plot of the movie involves Verne and the others as RJ gives them their first introduction to the neighborhood that has been constructed around their home, accidentally taking over Verne's role as leader. In truth, he's just using them to gather food for a bear whose winter reserves he accidentally destroyed.

Like many other animated movies of its time, it got its own video game adaptation.

The Over the Hedge film contains examples of:

Verne is alienated from the animals while RJ begins to feel bad about manipulating them.

Verne is alienated from the animals while RJ begins to feel bad about manipulating them.