Comic Strip / Over the Hedge 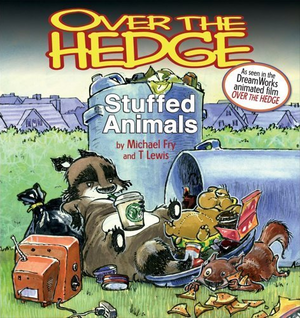 Over the Hedge is a newspaper comic created, written, and drawn by Michael Fry and T. Lewis. It follows the adventure of three woodland animals: a turtle named Verne, a raccoon, RJ, and Hammy, a squirrel. The animals have to deal with their home being turned into suburbs. The strip focuses on their problems of dealing with the increasing amounts of humans as well as the enticing technologies they bring with them.

In 2006, an animated film based on the comic was released by DreamWorks Animation. The plot of the movie involves RJ and the others as they first find out about the neighborhood that has been constructed in their home.

Over the Hedge comics contains examples of: