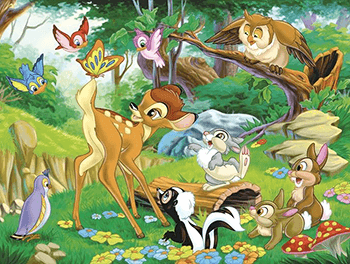 Remember when you were taught their names from a picture book?
Advertisement:

Woodland Creatures are a group of animals commonly associated with the forest. They are commonly used to symbolize the presence of Mother Nature. Expect to find them in a clearing in Enchanted Woods.

Although they are often several separate species, they will show great affection for each other and will rarely act or appear separately; in point of fact, it's common for species that would normally be predators and prey to appear side by side. A human being accepted into the group is almost always a sign of them being a Friend to All Living Things. The animals tend to be very shy and easily startled, but if a character is pure at heart, she will be allowed among them and they will even come to her aid. If they decide to take matters in their own hands then it will inevitably lead to a Gaia's Vengeance.

They usually appear to have to some degree a shared consciousness, or may be a part of the forest's soul itself.

The Egomaniac Hunter and the Corrupt Corporate Executive will constantly be on their tail and try to chase them away from their home. It will be required that a sympathetic human (usually a plucky kid, a female green activist and/or an initially cynical but ultimately friendly adult male) helps them.

How the Carnivore Confusion is treated depends on the story: sometimes the two groups will make a truce against the common enemy; sometimes the carnivores are shown to be mindlessly aggressive brutes, in which case playing them against the humans will be the best option; oftentimes, meat-eaters and plant-eaters simply appear side-by-side with no tension and no mention of what anybody eats.

If they are the focus of the story, they might be Talking Animals (with the suggestion that they are using an "animal language" that each of them can understand), and they may form an Unusual Animal Alliance.

Even if they have no acting role, they will make an appearance in stories with a Green Aesop.

If this trope is subverted, they will become the Disney Creatures of the Farce.

The group will almost always contain the following animals:

with the additional talent of:

Rarer members of these ensembles include ferrets/polecats, waterbirds (mostly ducks or geese), moles, opossums, frogs, snakes and the occasional friendly bear. Insects such as Pretty Butterflies, ladybugs and Virtuous Bees may also join the company. They are occasionally antagonized by Savage Wolves, a Wicked Weasel or a Kidnapping Bird of Prey (unless they are in the crew too, usually as Token Evil Teammates, Antiheroes or just gruff but ultimately decent characters).