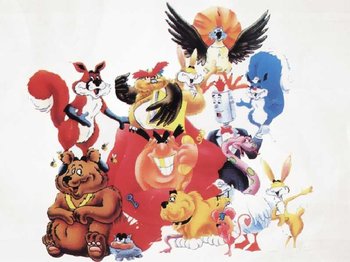 "In the immense map of the heavens, among the billions of stars and planets, there is only one globe expensive enough to show Bluffonia, homeworld of The Bluffers!"
Advertisement:

Has absolutely nothing to do with cliff faces or people who are good at card games.

The Bluffers is a short-lived animated series from the mid-late 1980s that originated from the Netherlands. It received a wide distribution, and the English dub has surprisingly good lip synch.

It follows some Woodland Creatures who live in the only patch of forest left in a desolate land known as Bluffonia, which is ruled by the nasty dictator Clandestino. The Bluffers, as these critters are called, are obsessed with stealing Clandestino's "Secret to Getting It All," which they hope will save their forest.