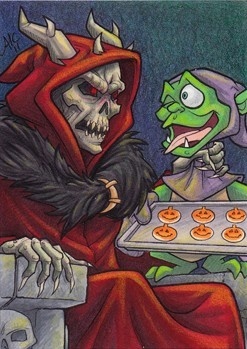 The unhinged man began to speak, in a phony accent. "I've got a delivery for a Mr. Bludvist, is there a Mr. Bludvist here?"
Drago groaned, already tired of this foolishness. Even after ten years, his deranged lackey never got any less annoying.
— The Dragon and the Butterfly: Whiteout, "Chapter 13: New Jobs"
Advertisement:

In a great deal of media aimed at children or families, there will be more than one villain working together against the hero, and one or more of these villains will be in charge over the other(s). However, the lower-ranked of these villains is meant to be taken far less seriously than the higher-ranked, whether due to being more cowardly, more comical, less powerful, less competent, or even simply less motivated than their dark superior.

This can have a lot of benefits to the writers, such as averting Villain Decay: no matter how many times the heroes triumph over the lesser villain(s), the fact that a more serious villain (or group of more serious villains) is still part of the same organization means there's still a credible threat that the heroes still need to deal with. Also, for works aimed at especially young children, this also allows the writers to make the lesser villain goofy and funny, thus keeping a work lighter and softer and generally less frightening for the kiddies.

The Laughable Lackey can also be The Igor, The Renfield, The Imp, a Minion with an F in Evil, a Sycophantic Servant, and/or a Punch-Clock Villain who only Pokes the Poodle, or possibly The Dragon, depending on his/her/their specific role in the evil organization—and in cases where The Dragon is comical due to ineptitude, this overlaps with Number Two for Brains. The Laughable Lackey is often the Butt-Monkey or The Chew Toy, as well, and can also be a Bumbling Sidekick to the serious villain, though there are more ways of being laughable than just clumsiness.

Compare Abusive Parents, Big Bad Wannabe, Brains and Brawn, Evil Duo, Eviler than Thou, A Lighter Shade of Black, The Man Behind the Man, My Master, Right or Wrong, Sliding Scale of Villain Effectiveness, Sorting Algorithm of Evil, Surrounded by Idiots, The Starscream, What Measure Is a Mook? A Terrible Trio can have this dynamic if one of them is in charge and meant to be taken more seriously than the other two, though the three of them together can act as the laughable lackey if they have a more serious boss, or they can even together act as the serious villain if they're not Played for Laughs have have one or more underlings who are. Sometimes overlaps with Vile Villain, Saccharine Show and Perky Female Minion. Contrast Hypercompetent Sidekick and More Despicable Minion, where it's the Big Bad that's humorous and/or sympathetic and the main minion that's fearsome.

Zordrak, Lord of Nightmares, has a very deep, growly voice courtesy of Gary Martin. Despite the wacky antics of his henchmen, he still has quite the intimidation factor.

Zordrak, Lord of Nightmares, has a very deep, growly voice courtesy of Gary Martin. Despite the wacky antics of his henchmen, he still has quite the intimidation factor.